Geese and cranes feeding in a field at Bosque del Apache, Photo by Jim Radford

Did you know that Bosque del Apache is one of the most heavily managed wetland refuges in the nation? This has always been true, but in recent years, the refuge has faced new challenges, including an area experiencing longer periods of extreme drought and a river more heavily taxed by a growing population. Scarcity of water has been, and will continue to be, a burden which refuge staff are perpetually adapting to in new and creative ways. We can be hopeful and optimistic about the future, however, because the refuge is fortunate to rely upon a very talented team of creative and passionate individuals, driven to find innovative ways to ensure successful farm crops and wetlands are available at just the right time each season.

For this month’s OASIS news, we’re joined by Jeff Sanchez, Supervisory Biologist at Bosque del Apache National Wildlife Refuge for the past six years. Interestingly, this is not Jeff’s first time working at Bosque del Apache, as this is where he first began his long career with the U.S. Fish & Wildlife Service, serving as a student intern under John P. Taylor, before moving on to Tetlin and Togiak NWRs in Alaska, Sequoyah NWR in Oklahoma, and Bitter Lake NWR in New Mexico.

As a native New Mexican, Jeff grew up in the Middle Rio Grande Valley, and his youth was spent traversing the network of ditches and cutting paths through the bosque near his home every day until “the porch light went on”. All his life, he has been drawn to the plants and wildlife near the river, drawn to observing the delicate balance of this remarkable ecosystem, which somehow manages to simultaneously be both fragile and yet so very resilient. This habitat holds a special place in Jeff’s heart and will always feel like home, he says. Thanks to these early experiences and his subsequent career opportunities, he has developed a longer-term perspective than most. He says, “I’ve gained an intimate knowledge of the varied ecological systems and an understanding of the complex interactions between wildlife and people in the valley. Over the last four decades I have witnessed drastic environmental changes as water use and other human disturbances increase pressures on natural ecosystems. These on-going changes emphasize the need for purposeful and adaptive habitat management planning on a large and long term scale. As we move into a future where drought will be an ever present concern, we must be adaptable and we must develop strong partnerships with a diverse array of stakeholders. Within the Middle Rio Grande Valley, we’re all in this together and we’ll increase our successes and lessen our burdens by working together and leaning on one another’s strengths!”

During his career, Jeff has supervised cooperative farming programs and restored and created habitat for ten federally listed species (including the New Mexico Meadow Jumping Mouse who you heard about in our last issue).  He’s organized various large scale restoration projects, including several on the Rio Grande and one that re-routed the Rio Hondo in southeastern New Mexico to create habitat for three critically endangered invertebrates. He’s overseen complex wetland management programs and developed the Middle Rio Grande Valley Waterfowl Plan, which is utilized by numerous partner agencies within the valley, like Sevilleta NWR and Ladd S Gordon Waterfowl Complex, to name a few. Jeff tirelessly advocates to protect refuge water rights and collaborates to maximize water conveyance efficiency in the Middle Rio Grande Valley. He also regularly serves as a professional consultant representing wetland management restoration techniques. 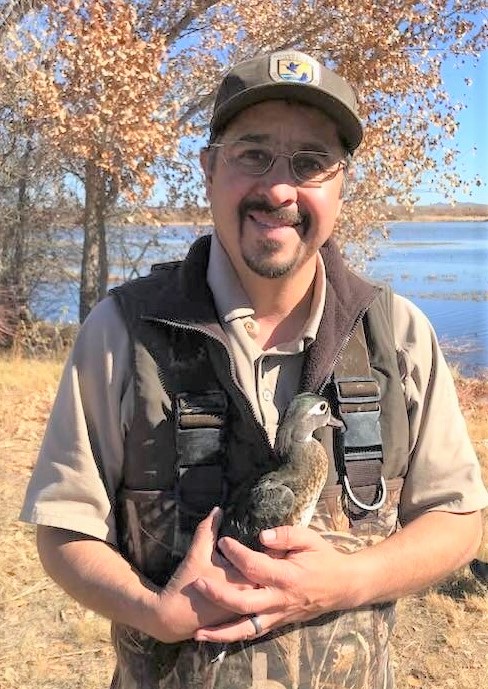 Jeff’s unique experience and skillset make him a great leader for the team working to restore and manage habitat on the refuge, but he’s quick to point out that it is indeed very much a team effort! Below, Jeff explains some of the ways refuge staff are adjusting to meet new challenges.

It takes a whole team of staff members to develop and employ a year-round plan for maximizing water efficiency on the refuge, while still meeting wildlife needs. We strategically manage water within Bosque del Apache’s wetland management units to re-create the types of habitats that used to be abundant throughout the Middle Rio Grande Valley and which wildlife need to survive. A complex network of delivery canals and ditches are used to move water through the refuge. 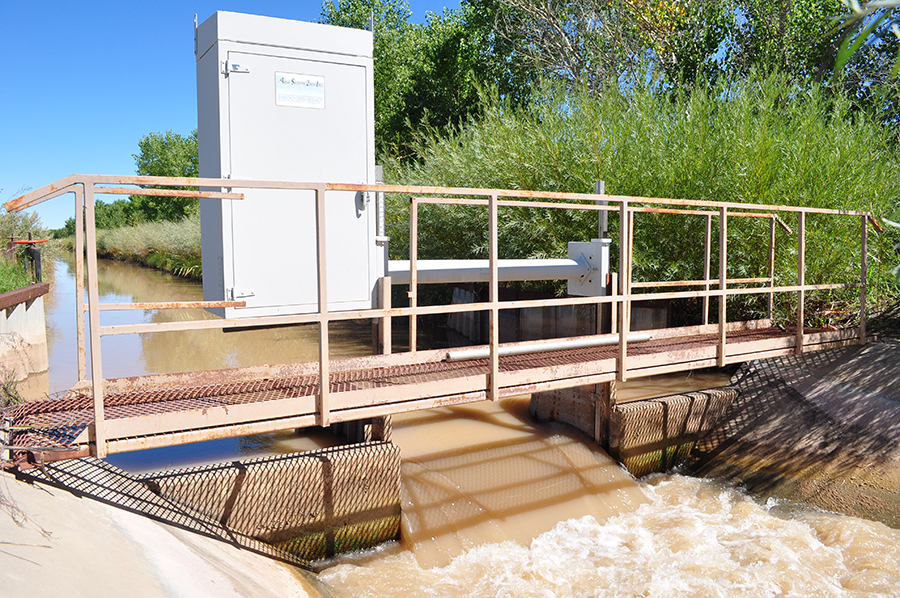 Water control structures, called Langemann gates, are utilized to move water through a system of ditches and canals throughout the refuge

During the summer months, moist soil and wetland management units are strategically flooded and dried to encourage seed production from naturally germinating annual plants; these native seeds will later be food for waterfowl in the winter. Grain crop fields are planted and irrigated throughout the spring and summer months. In late fall, as water is available, wetland management units are flooded to provide roosting and feeding locations for migrating waterfowl, cranes, and geese. While in some places water is held throughout the winter, in others it is sometimes moved through ditches from one unit to another as waterfowl finish feeding in a particular wetland. This management technique results in an ever-changing mosaic of wetlands, bosque, and dry fields to support the diverse needs of a variety of wildlife at any given time.

It is critically important that the refuge have access to water during summer months for waterfowl food production and for federally-listed species habitat creation/maintenance. 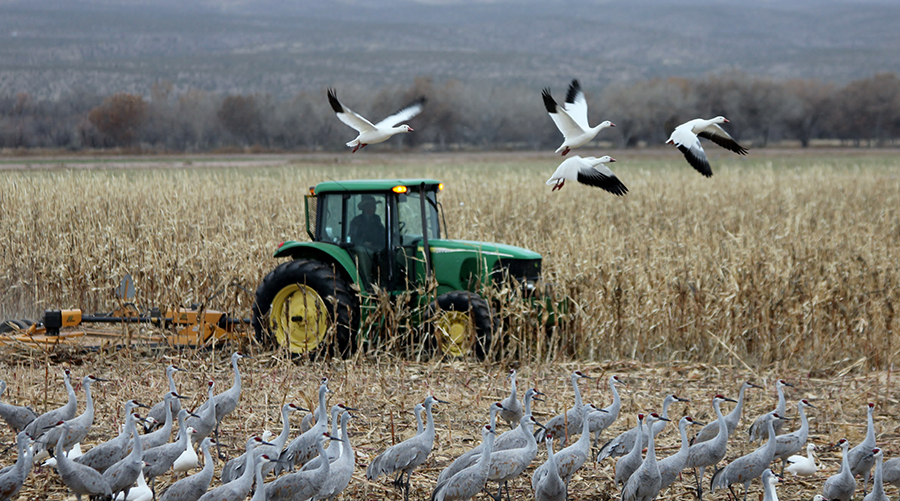 It is equally as critical to have water during the winter months to feed waterfowl, cranes and geese as well as provide roosting habitat.  In drought years, such as recently, irrigation flows used by the refuge can become highly intermittent, and during such scenarios, the refuge depends on groundwater wells to augment limited surface water supplies; however, this can become expensive. To prepare for forecasted extreme drought conditions, the refuge is coordinating and working collaboratively with other agencies to move water into and through the refuge more efficiently. This includes creating new infrastructure that will allow the refuge to use available water for federally listed species, waterfowl management prescriptions, and habitat restoration efforts.

In addition, the refuge annually completes seed yield surveys in all wetland units and has recently used this data to prioritize systematic delivery of all available water to the units that have the highest seed production. This change in management focus will support as many birds as possible during the overwintering season. During the 2021 season, drought conditions caused the refuge to remove several units from production/flooding, including the highly visited Unit 3S along the west side of Highway 1 (also called the Wetland Roost), which is known for photo opportunities of roosting sandhill cranes.

The refuge is now flooding feeding units more efficiently and slowly in recent years. Because waterfowl favor feeding in areas that have recently been flooded, slowing our seasonal flood-up regime maximizes use of food grown for waterfowl feeding activities. If the units are flooded too quickly, the seeds/food will simply sink to the bottom where ducks cannot access it or it may be washed away, out of the unit. The seeds also have a breakdown period after they are submerged in water, making them less desirable for waterfowl use. This is why you will see an impressive concentration of ducks following the slowly expanding water’s edge within a recently flooded wetland unit.

We are constantly testing and implementing changes to our wetland management techniques, looking for ways to be most efficient and conservative while still successfully meeting the needs of wildlife. All in all, the refuge is learning to keep pace with new challenges by making extreme adjustments to its wetland management focus to keep up with changing times and the new, more arid “normal” of the southwest.

Stay tuned for next month’s OASIS news, where we’ll focus on some of the ways the refuge is partnering with other agencies within the Middle Rio Grande Valley to enhance habitat along this very important stretch of the central flyway.

About the Author: Trisha Sanchez