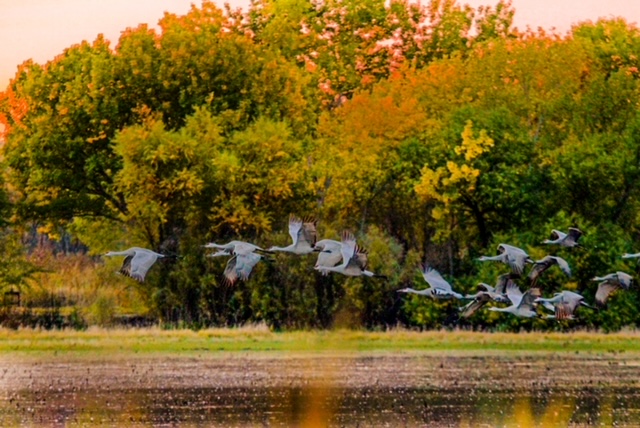 The friendly faces of Sandra Noll and Erv Nichols have long been a welcome sight at Bosque del Apache. They are wonderful advocates for Friends and the refuge, and over the years have always shown up to lend a helping hand, guided tours and hikes, educated the public at Festival of the Cranes about all things crane, and even made beautiful and unique hand-crafted jewelry for Friends to sell in the Bosque Nature Store. Their extensive knowledge about crane behavior, vocalizations, and history has been an invaluable resource and we’re grateful for their perpetual willingness to share with our family of Friends members what they’ve learned on their many journeys.  If you haven’t yet attended one of their “Crane Basics” or “Cranes of the World” presentations at Festival of the Cranes, be sure to add your name to the list next time.  You won’t be disappointed! We on Friends staff are often asked where the sandhill cranes go when they depart our refuge. In this article, Sandra shares her reflections on the first exciting journey she and Erv embarked on years ago, as they followed the cranes on their migration north to observe them in their summer breeding grounds. Here she is to describe the journey in her own words:

I had seen sandhill cranes off and on over the years but it wasn’t until 2006, my first full fall and winter seasons at Bosque del Apache, that I really fell in love with these elegant grey birds. I had moved near Socorro, NM, where the annual trumpeted arrival of the cranes announces fall and magically signals the cottonwoods to turn brilliant yellow and then gold. After arriving, the birds settle in for the winter, allowing us humans the privilege of observing them from the time they leave overnight roosts at dawn until their return each evening. To the delight of the refuge’s many visiting photographers, the cycle of the cranes’ days at Bosque del Apache is often bookended by stunning sunrises and sunsets. Over the winter that first year, I became accustomed to their presence and it wasn’t until great skeins of cranes began migrating north in February that I realized with regret that they wouldn’t always be a part of my day. Where were they going and what would they be doing when they got there? I’d read about their migration to nesting grounds in the north. With my curiosity piqued, I wanted to experience this journey firsthand! My partner, Erv, and I decided to follow them – to migrate with the sandhill cranes! The first task at hand was to choose our route. The two subspecies (“greater” and “lesser” sandhill cranes) seen at Bosque del Apache are identical in appearance but differ in size (lessers are about 30% smaller) and the location of their nesting grounds. Bosque del Apache’s population of greater sandhill cranes nests in Utah, Colorado, Wyoming, Montana, and Idaho. The refuge’s lesser sandhill cranes migrate greater distances to nest in northern Canada, Alaska and Siberia. Incredibly, some of these birds have an annual migration of 5,000 miles each way! In early March that year, Erv and I followed the Rocky Mountain Population (RMP) of greater sandhill cranes north to their staging grounds on the Monte Vista National Wildlife Refuge in southern Colorado. The RMP numbers around 22,000 and comprises the majority of cranes overwintering along the Rio Grande. In Colorado, the RMP, along with a few lesser sandhill cranes, stage near the snow-capped peaks of the Rocky Mountains for which they are named. The beautiful landscape is a highlight of Monte Vista’s annual Crane Festival, which is held each year in March. Check out information on their festival here: www.mvcranefest.org/ After beholding the majesty of the cranes once more and enjoying Monte Vista’s Crane Festival, we then crossed the Rockies to experience the largest staging of cranes in North America (over 500,000 birds, primarily lesser sandhill cranes) along the Platte River in Nebraska. Lesser sandhills overwinter in northern Mexico, Texas and Arizona, as well as New Mexico. To witness their staging along the Platte River is truly to witness one of the last great migrations of wildlife in the lower 48 states and we were in awe! For more information on this phenomenon visit: rowe.audubon.org. Staging areas like the two we visited are vitally important to the sandhill cranes’ migration journey, for it is there that they stop to rest and feed for three to four weeks (gaining one third of their body weight) prior to embarking on the grueling journey further north. The shallow water roosts and ample food that characterize these historically used staging areas are critical for cranes’ accrual of energy reserves needed to survive the initially low temperatures and frozen food resources of their nesting grounds while maintaining capacity for reproduction. After leaving the staging areas, Erv and I “migrated” on to Alaska where we observed two pair of cranes while volunteering at the Maritime National Wildlife Refuge. Both male and female cranes are attentive parents, participating in nest building, the thirty-day incubation of two eggs, and the rearing of chicks as well. Cranes are highly territorial when nesting and susceptible to human disturbance so we observed from afar until they brought their colts (young) out to forage. The eight to nine weeks before fledging is a dangerous time when crane parents, even though vigilant, lose many colts to predators and other hazards. After fledging, the colts begin their first journey south, flying with one or both parents, and this is when they will finally have their first encounters with other cranes. As they migrate south to winter grounds – some right back here to Bosque del Apache – they will gather into larger groups. There is no staging on the return trip; pairs who successfully fledged offspring travel according to the stamina of their colts. Because cranes are not always able to successfully fledge colts each year, we see many pairs with only one colt or even none during winter. It takes very experienced cranes to successfully bring two healthy colts to the wintering grounds! The colts will remain with their parents all winter at Bosque del Apache but then must make their own way. If they don’t voluntarily leave to join juvenile groups by the time they reach nesting grounds again the next year, they will be driven away. Unable to observe nesting or parenting of subsequent siblings, cranes, who first mate between three and five years of age, must learn these skills through trial and error. Once the colts had fledged and the new crane families began to fly south again, Erv and I also headed home feeling privileged to have shared the cranes’ migration. We now carried with us an even deeper love and respect for their intelligence, adaptability and annual cycle of life.