The Joy of Hummingbirds 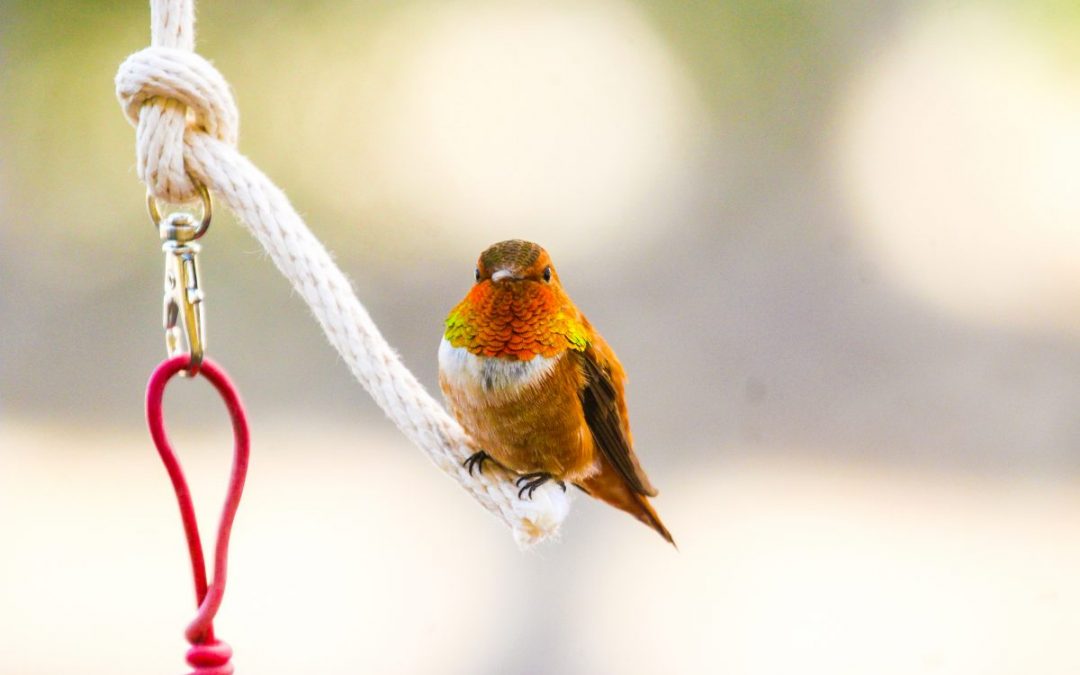 Boss of the feeder, this Rufous – AKA “Atilla the Hum” – is fiery in both plumage and spirit | Photo by Erv Nichols

Hummingbirds are best described in superlatives… smallest, fastest, most specialized feather structure, highest metabolism.  In this article you’ll discover intriguing aspects of hummingbird biology, behavior and symbolism, identify the four species most often seen at the refuge and  learn how to attract and protect them in your own patio or garden.

Hummers are the smallest of all birds and the smallest hummingbirds have the fastest wingbeats of any bird on the planet – about 80 times/second in forward flight and upwards of 200 times/second in courtship flights! They also boast the fastest flight of all small birds: around 30-40mph in forward flight reaching 60mph in courtship dives during which they can generate a G-force of 10… the same force at which fighter pilots generally black out!

They are not only fast but incredibly agile. Unique shoulder anatomy allows their wings to move in a figure-8 pattern facilitating prolonged hovering and quick pivots as well as flight in horizontal and vertical planes, backward, on their side and even upside down for short distances.

Hummingbirds also have the most specialized plumage of all birds. Although their feathers have some pigment, their brilliant iridescence is related to a unique feather structure which breaks down light and reflects it back in different colors according to the bird’s (and viewer’s) angle to the sun. As in most species, females and immature males are relatively plain.  Adult males show off their flashy crowns and throat patches (gorgets) in courtship and territorial displays.

They also have the highest metabolism of all animals. For example, hummingbird hearts average 800 beats/minute compared to the human average of 70 beats/minute. To maintain their high metabolic demands a single bird consumes more than half its body weight in nectar alone, visiting over 1000 flowers between dawn and dusk. Conserving energy is also crucial and a hummingbird’s life is a delicate balancing act between expending and conserving energy. They perch often in a pattern of short frequent feedings alternating with rest periods for digestion and elimination. A unique biological adaptation allows hummers to digest and eliminate nectar in just 15 minutes maintaining an optimal flight weight!

And a final superlative – hummingbirds make the longest migrations by body weight.  The Rufus Hummingbird, a New Mexico migrant known for its irascible nature, has the longest migration in the west traveling up to 4,000 miles from breeding grounds in Canada and Alaska to wintering grounds in Mexico.  They generally make a clockwise migratory pattern following the Pacific Coast north to breeding grounds in Spring and returning south via the Rocky Mountains, a pattern that brings large numbers of them to the refuge in late summer and early fall.

Another species commonly found on the refuge is the Black-chinned, our most abundant hummer and the only one that nests here. The black chinned male’s gorget appears black above a conspicuous white collar from most angles but shows a brilliant violet band in the right lighting. | Photo by Erv Nichols

A third common species found at Bosque del Apache is the Broad-tailed, numbers of which migrate through the refuge in spring in route to breeding grounds at higher altitudes. Broad-tailed males are often heard before seen, readily identified by their unique silvery wing trill. And finally, we often see the tiny Calliope, the smallest breeding bird in North America weighing only 0.1 ounce (you could mail 10 with a single stamp!) which migrate through in smaller numbers in spring and fall in a migration pattern similar to the Rufous.

The tiny Calliope male has a dramatic drooping gorget that he can elevate and expand in threat or courtship displays – a female is likely in the vicinity! | Photo by Mary Catherine Ray

Found only in North and South America, hummingbirds are the second largest group of birds on the planet, second only to flycatchers. Most species are found in the tropics of South America. Only about 5% (20 species) are migrants or residents in North America; “About” because, related to climate change, habitat loss and increasing human support, the range of hummingbird species is expanding.

Overall hummingbirds are solitary birds and highly territorial. Unlike sandhill cranes, male and female do not form pair bonds. Males seek territories where they are likely to encounter the most females. Their energy goes into defending these territories and attracting females with athletic courtship flights and color displays. Females (who select the fittest males and may breed with more than one) seek and defend the best territories in which to build a nest, incubate eggs (usually two) and raise the young – tasks completed totally on their own! Black-chinned female feeding her two chicks a rich slurry of digested nectar and insects. The chicks will soon fledge from their nest which has been strengthened with spider web and camouflaged by lichen. Female hummers build intricate nests strong enough to contain chicks that will be adult sized when they fledge. | Photo by Sandra Noll

These tiny jewels symbolize life, joy and freedom.  For the Dine’ (Navajo) they are symbols of beauty and wisdom. For other Native American cultures, including Pueblo tribes of NM, they are clan animals. Hopi and Zuni legends tell of hummingbirds intervening to bring rain. In ancient Mexico hummingbirds were considered sacred, associated with royalty and warriors, and in some Mexican tribes today hummingbirds are believed to be messengers from the afterworld, manifestations of the spirits of those who have died or a sign that a departed loved one is watching over you.

Who can resist being enchanted by these beautiful bundles of energy?  They are indeed joyful birds that we can entice into our gardens and patios with flowers and feeders. It is recommended to hang one feeder out prior to hummingbirds arrival – that’s early April in the central Rio Grande valley – and maintain a feeder until two weeks after their last sighting which was late November last year!  Place your feeders near cover for the bird’s protection and rest periods.

Hummingbird nectar is made by dissolving 1 cup of white sugar (do not use honey, brown or powdered sugar) into 4 cups of water.  Avoid food coloring and clean feeders thoroughly at least weekly in order to protect the birds from harmful chemicals and bacteria.  It’s even better to use feeders as supplements to a variety of colorful flowering plants in your garden or patio pots.  Color is key as hummers have a limited sense of smell.  Hummingbirds also need protein and other nutrients. They hunt and eat small insects in flight and actively glean insects from leaves and branches so avoid using pesticides on your flowering plants.  A water feature is particularly appreciated – hummingbirds need water as well as nectar and love to bathe. Hummingbirds are intriguing creatures living their lives in a world largely invisible to us. I hope the article has taken you a bit further into their secret world and enhanced your joy! We think this is a female Rufous nectar feeding but it can be very hard to know for sure when it comes to female hummingbirds! | Photo by Mary Catherine Ray