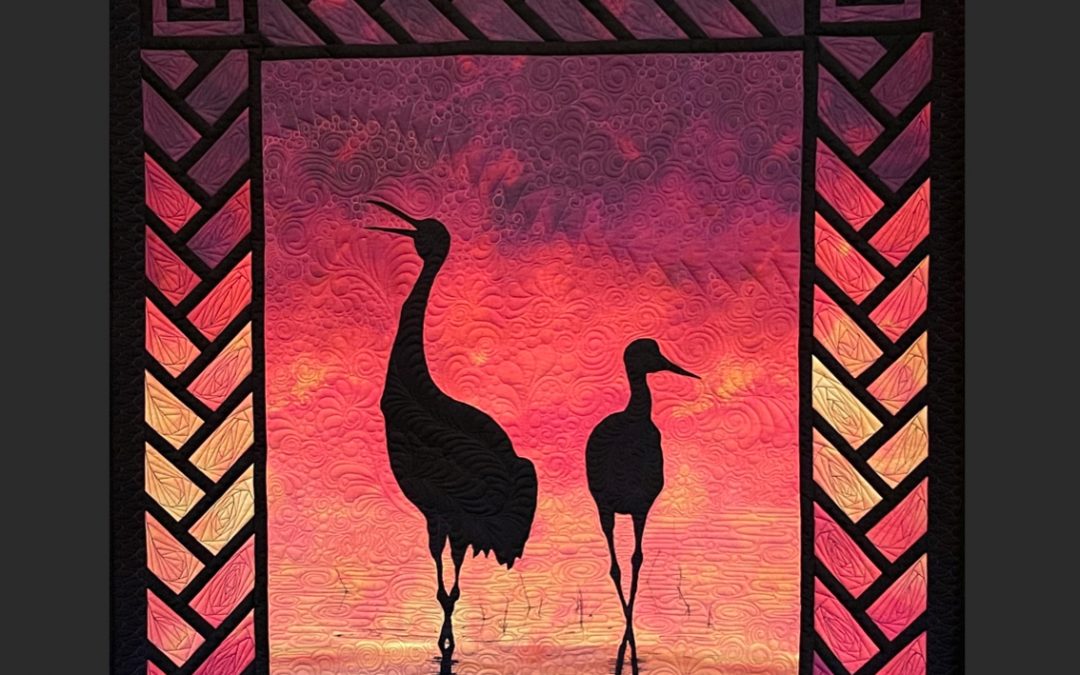 2022 quilt, donated by the Fiber Arts Guild of Socorro County and being raffled by Friends of Bosque del Apache now – tickets on sale until Dec. 15th.

Friends of Bosque del Apache is extraordinarily lucky to have been selected as the fortunate recipient of so much generosity bestowed by the talented members of the Fiber Arts Guild of Socorro County over the course of seven years. Again and again, they have chosen to gift Friends with one-of-a-kind, hand-crafted quilts, which we in turn have used to raise somewhere north of $25K – valuable funds that support many important projects on the refuge.

This program has evolved with time, from a silent auction in the early days to the raffle we now hold annually. It has developed into a lucrative fundraiser that many of our members anxiously look forward to participating in each year and has come to symbolize the commencement of our Festival season, a celebration of the return of the cranes. Each year we all eagerly anticipate the unveiling of the new design, which has been labored over for countless hours by the artists and quilters of the Guild, and each year we think, “This is exquisite. There’s no way they can out-do themselves after this one!” But they continue to raise the bar higher and higher, stunning us again with something that is somehow, inexplicably, even grander and more breathtaking than ever before. With attention to detail in every intricate stitch, each quilt gifted is a real and true masterpiece!

We at Friends continue to be so very grateful for the hard work and dedication of the Guild members each year and we are humbled by their generosity in choosing to support us in this fun and unique way. We wanted to know how they feel about the program, why they choose to do this each year and what it means to them, so we asked Guild members Debi Card and her mother Norma Lorang for some personal insight. Here is what they told us, as they reflected back over the years on each quilt lovingly crafted and then donated to Friends of Bosque del Apache.

Bosque del Apache National Wildlife Refuge has provided our community with an opportunity for education, relaxation and pure enjoyment for many years. The silent auctions and raffles held in conjunction with Festival of the Cranes has been our means of giving back to this special place. Because we are quilters, we have chosen to create a quilt yearly to donate to the Friends.  We started with a Christmas quilt made from a printed cardinal fabric and have made a different quilt each year since that time. The first quilt given to Friends of BdA, a Cardinal print which was auctioned in 2016. This quilt was made from a  tee shirt commentating the sighting of the Rufus Necked Wood Rail at Bosque del Apache in 2013.  It happened the first year Kevin Cobble took over management of the refuge and he and his wife, Crystal, ended up being the highest bidders for this quilt and taking it home. This is no doubt a special memory for them from his time spent at the helm of this important refuge.

The first two quilts, which Friends of Bosque del Apache auctioned off during their annual Friends Dinner at Festival of the Cranes in 2016, were such a success that we decided to begin making custom Festival quilts the next year. The 2017 quilt featured Festival artwork from several past Festivals.

This photo was taken while the unfinished quilt is on the design wall. The team of quilters adds and arranges until they are pleased with the design and then the components are sewn together. The 2020 quilt featured the previous year’s Festival artwork, plus a look at the Festival Brochure cover artwork which inspired it.

The 2020 quilt (above) was the first of the three most recent quilts to feature quilting from Bobbi Lucero at Edge Water Quilting in Albuquerque. The quilting is customized to fit the overall design, it is dense and textured. This style of quilt is known as “Modern Quilt.” Modern quilts generally incorporate bold colors, asymmetrical design and negative space, which lends itself well to intricate quilting.

As we all know by now, the emergence of COVID meant adapting the way the world does almost everything, and we were no exception. Due to COVID and the cancelation of Festival in 2020 and 2021, there has been no tee shirt/Festival art to inspire our last few quilts. In light of this, the last couple of quilts have been original designs created by “Team Crane” of the Fiber Arts Guild of Socorro County. This year’s quilt was inspired by a photo spotted on the Friends website, shot by Bob Maynard of Colorado Plateau Photo Tours. It caught the attention of several members of the Fiber Arts Guild and was the unanimous choice for this year’s quilt. Bob graciously granted permission to use his spectacular photo as inspiration. This was the first year we were able to complete the “Bosque Quilt” in time for entry in the Socorro County Fair and we were thrilled when it won a first place blue ribbon and was also awarded Best of Show! 2022 Quilt and the photo that inspired it.

This year’s quilt drawing will be held on Facebook Live on December 16th. Tickets are $10 each and can be purchased at FriendsofBosquedelApache.org/a/quilt-raffle-2022.