Spring at Bosque del Apache Means Welcoming a New Round of Visitors! 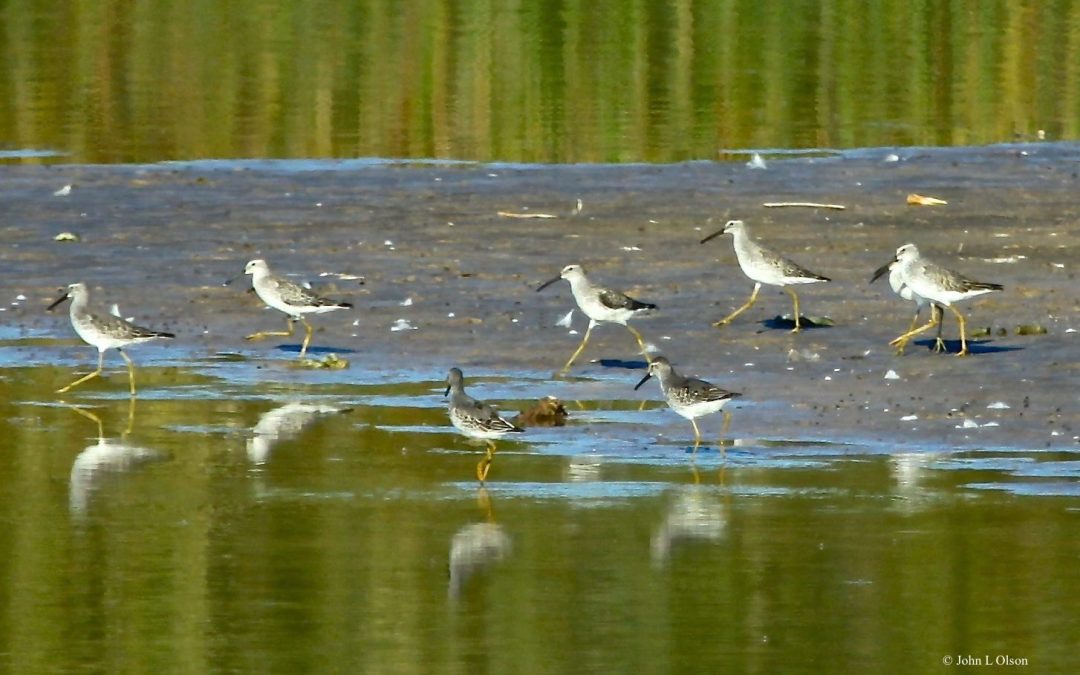 March – the month of anticipation. Anticipation of what is to come in the spring, what might show up that is new – and when. Will spring be early or late? Except for some late migrants out of Mexico, the sandhill cranes and snow geese have departed and our summer residents are still far to the south. There are anticipated birds that appear in March every year, the white-faced ibis and waves of American white pelicans against the blue sky, here one day but gone the next. Cinnamon teal numbers increase dramatically as do some of the other duck species before they, too, head north to the prairie potholes. But one group of birds stirs my imagination like no other – the long distant migrants spending one season in the northern hemisphere and the other in the southern hemisphere. These are the wind birds, written about so eloquently by nature writer and novelist Peter Matthiesson in his coffee table book with illustrations by William Verity Clem.  “The restlessness of shorebirds, their kinship with the distance and swift seasons, the wistful signal of their voices down the long coastlines of the world make them, for me, the most affecting of wild creatures. I think of them as birds of the wind, as ‘wind birds.’”. I will drive further, go out more often and spend more time looking for shorebirds than any other group of birds. Luckily, Bosque del Apache is one of the better places in New Mexico to see these long-distance migrants when conditions and timing are right. Most shorebirds breed in the far north and many don’t even breed near the shore despite their group name. Lesser yellowlegs and Hudsonian godwits build nests in the stunted spruce of the boreal forest and several species of plovers and sandpipers nest in wet grasslands on the tundra where days are long and food is abundant. Because their migration is long and can take many days, stopover sites such as Bosque del Apache NWR, a designated Important Bird Area for migrating shorebirds, are critical to their successful journey. Here they find a safe environment and abundant food to refuel and may stay several days to fatten up before continuing their journey south. Because wetland units are being drawn down in the spring in anticipation of the summer growing season for duck food, the habitat can be perfect for migrating shorebirds – mudflats with worms and crustaceans or wet meadows. Shallow water can be attractive to Wilson’s phalaropes who are sometimes accompanied by their rarer red-necked or red phalarope cousins who normally spend their time on the open ocean. Looking at 100, or a 1000, peeps as the small shorebirds are collectively called, can be a drag but it can also produce an uncommon white-rumped sandpiper or even a very rare sharp-tail sandpiper.  In Spring 2021 a rare Hudsonian godwit was found among the regular marbled godwit off the Flight Deck. As their name suggests, the Hudsonian is a bird that nests around Hudson’s Bay and normally flies across the eastern US from its winter home in southern South America. This was the sixth record for the refuge in its 82-year history. Not every spring produces a rare shorebird but it happens often enough to keep me anticipating what might be next – a ruff in 2010, a ruddy turnstone in 2019, the godwit in 2021, a sharp-tailed sandpiper a few years back. And the less than annual snowy plover, pectoral sandpiper or red-necked phalarope. In our previous Oasis newsletters you read about Bryden’s anticipation of proving that a small mouse really exists, Don’s anticipated daily visits for a year and now my anticipation of the yearly return of the shorebirds. What are you anticipating from this Oasis that keeps you coming back again and again?